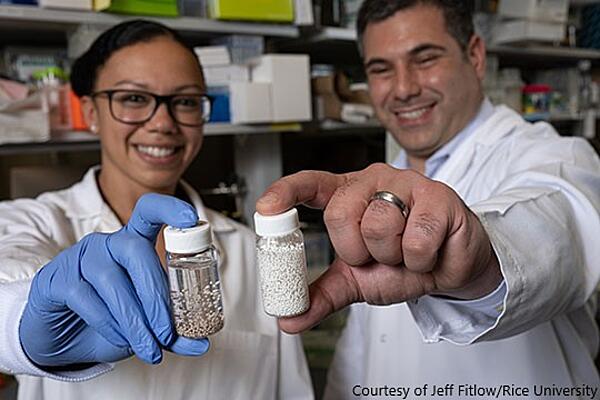 Hope you had a good weekend.

Don’t get me started on Daylight Savings. Hope you’re managing with the time change.

Been a busy couple of weeks between judging pitches and meeting with innovators shaping the MedTech and biotech scene.

Back on the road again.

If you're going to be at a LSI— remember to listen to Liz, and stop by our booth and say hello.

here are some highlights:

The J&J baby powder controversy is worse than we thought.

Johnson and Johnson’s been in the hot seat for years now over claims of cancer-causing asbestos in their talc-baby powder. (Something the company’s vehemently denied… See image above.)

Well, new information shows that the company was pretty concerned about asbestos and its side effects even 50 years ago— to the point where they were testing the effects of asbestos on Black inmates at a prison in Pennsylvania.

Headed by the infamous UPenn dermatologist Albert Kligman, the inmates were paid anywhere from $10 - $300 to get injections of tremolite and chrysotile asbestos, as well as shots of talc in their lower backs.

It wasn’t just J&J in the mix— Dow Chemical and the federal government also contributed to the funding of these experiments.

Now, J&J isn’t denying the report but states they regret working with Kligman and that what happened doesn’t reflect how the company handles its business now.

So, how are all the lawsuits going?

They’ve been shelling out a lot of dough. Recently, they found a loophole to declare bankruptcy, but the release of the asbestos experiments will be a (legal) problem for them moving forward.

Mice Cancer-Free Thanks To Tiny Beads

Another newsletter, another breakthrough in immunotherapy.

This one is from our hometown of Houston…

Bioengineers from Rice University have found a way to eliminate advanced-stage ovarian and colorectal cancer in mice by developing a method using noninvasive, natural compounds that reprogram the body’s immune system to fight cancerous tumors.

These implantable “drug factories” are beads that contain cells with the protein interleukin-2 and activate white blood cells, turning them into cancer-fighting agents.

Beads have protective shells that keep the engineered cells safe, and even though they’re viewed as foreign objects in the body, they’re not recognized as immediate threats.

Clinical trials for humans could happen sometime this year. Here’s a link to the study published in Science Advances.

BTW— have you seen our updated Oncology page? Check it out if you haven’t already.

Accelerated approvals have been on the uptick in recent years but have remained unchecked in their ability to demonstrate any clinical benefit. This bill aims to change just that.

The bill includes the automatic expiring of accelerated approval status after a year, unless the post-market study is completed and cleared or if the Secretary of Health and Human Services determines enough progress has been made.

Other changes include specific codifying requirements, reaching an agreement with FDA on how studies will be conducted, timely updates on post-approval studies including enrollment targets and milestones, and much more.

There have been a lot of drugs sitting in accelerated approval limbo, and this bill will certainly change that.

More accountability in the development of drugs is good news for everyone.

Bluebird Bio is struggling with a 10% stock dive after news of the CFO’s resignation last week, just seven months after joining the company. This is after shares already plummeted 62% since the oncology spinoff late last year.

The company’s pockets are also empty, as revealed in its Form 10-K annual report for 2021, “There is substantial doubt regarding our ability to continue as a going concern. We will need to raise additional funding, which may not be available on acceptable terms, or at all. Failure to obtain this necessary capital when needed may force us to delay, limit or terminate our product development efforts or other operations.”

Though things are looking bad, it's not time for Bluebird to sing the blues... just yet.

The company has a couple of big-name drug approvals in the queue for later this year. A lot is riding on these approval applications, and it’s certainly a tumultuous time in the Bluebird nest.

Come check us out at LSI. Hope to see you there.

In The Meantime, Get Caught Up With The Last Episode of Inventing Tomorrow

Host Isabella Schmitt, RAC sits down with Ron Solar, CEO of ThermopeutiX, and Blythe Karow, Co-Founder and former CEO of Evren, to discuss the the importance of protecting your ideas.